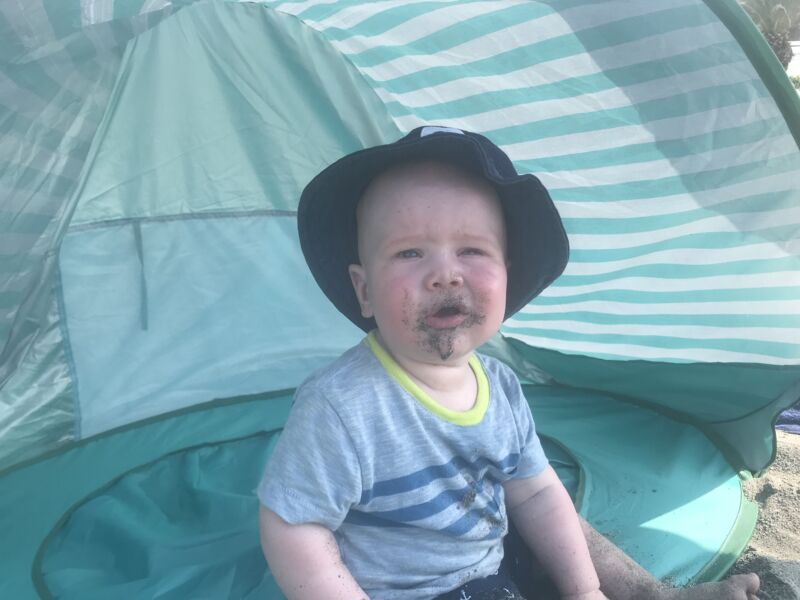 In August 2019, we went to Andalusia in Spain. It was the longest we’d been abroad with our first born Dexter, who was three and the first trip abroad for our baby, Felix who was 8 months old at the time.

Looking back now, I have so many happy memories of our two weeks in Spain. We spent the first week with the boys’ grandad, in his gorgeous home in a tiny village in Andalusia, before moving on to a rented apartment in the mountains with stunning views over Lake Viñuela and a short twenty minute drive from the beach.

But at the time, it was hard. Like, really, really difficult. Being in a different country with a toddler and a baby with the heat, the lack of routine and the late Spanish nights, made things really difficult for my husband and I. We snapped at each other, we moaned and groaned and despite trying to do everything we could to try and have a holiday, the fact of the matter is, travelling with kids leaves hardly any time for you to enjoy yourself, unless you’re on the ball.

If we had our time again, would we do anything differently? Absolutely! We are so lucky that we had the luxury of staying with family for the first week and that our kids are generally really easy to deal with, but next time we go away, and boy I do hope there will be a next time (although the husband may need some convincing) there’s a few things I’d change.

By the time we got on our holiday, Felix had been weaning for two months and you’d think after going through this whole process with Dexter that we’d be dab hands at it by now – not so! I felt on edge about what to feed Felix most days, worrying about the mess we were making in my father in law’s home and panicking about salt and sugar content. I even resorted to a baby jars a few times which isn’t like me at all, yet giving them made me more comfortable that he was getting his usual daily dose of vitamins and minerals.

If I’d made a meal plan, like we usually do at home, it would have been so much easier to stick to our usual schedule but because Felix’s sleep was all over the place thanks to the late nights and hot days, as soon as he became hungry – I’d panic. I also really missed my freezer stash of batch cooked meals, so if I had my time again, I’d do a big batch of cooking on day one, so he would have lots of healthy snacks and finger foods for the whole week.

2. Insisting on sticking to routine

As I alluded to in the last paragraph, Felix’s routine was all over the place with him not going to sleep until really late at night and not sticking to set meal or bottle times. Although I have always been baby led when it comes to my children, they have both developed their own routine during the baby months with a specific number of naps, bottles and meals and a strict bedtime of 6-7pm which Dexter still sticks to now at three years old.

I wish we’d stuck more to this routine as we found that we were stuck next to a sleeping baby most of the day and trying to soothe him into the late evening meaning we didn’t get much of a holiday ourselves. Our babies have always thrives on routine which means whenever something doesn’t go to plan it results in a grumpy baby which isn’t fun for anyone!

I totally and utterly cheaped out on the car hire and of course because of this we ended up with a tiny Toyota Yaris that was about twelve years old. Not only did we struggle to fit all the things we brought with us in the car, but it was impossible to drive in the mountainous region we were staying in resulting in some scary moments! Next time, I’ll definitely pay more to get a bigger, nicer car!

This may sound like simple changes to make, but I bet next time they will make all the difference. Will we make it abroad again in 2020? Who knows! But, if we do, I’ll be making sure we are much better prepared this time!