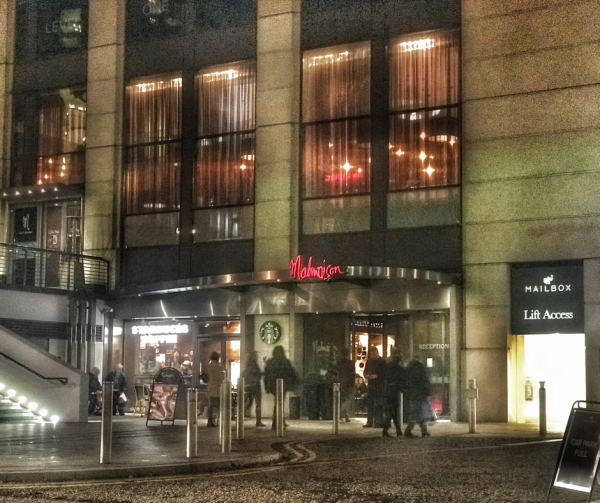 We love a good hotel, and Malmaison have been on our wishlist for a very long time, so we were really excited to see what they had to offer.

I was excited to read online that the Malmaison hotel Birmingham is located inside a converted Royal Mail building because I love it when hotels convert old buildings to make something really special. I pinged over a quick email to Malmaison via their contact form on their website to check that we could have a cot in our room and enquire about early check-in. Less than 24 hours later I received a phone call from Malmaison stating they were more than happy to put a travel cot in our room, however they couldn’t guarantee an early check in, all that we could do was turn up at 1pm and see if there was anything available- I was a little bit disappointed with this, but fully understood why, as their check out is not until midday which is lovely.

The Malmaison Hotel Birmingham is located right in the heart of Birmingham’s city centre and is a mere five minute stroll from New Street station, making it the perfect base if you are arriving into the city by train. It is located next to the Mailbox, a upscale mall with lots of high end shops and restaurants meaning everything you could possibly need is right on your doorstep.

We decided not to risk being turned away at 1pm, so we waited until after 3pm to check in. There was a small queue when we arrived to check in, but as there were four people on reception, we didn’t have to wait too long. We were greeted by a lovely friendly girl who explained how breakfast worked, offered us papers for the morning and confirmed our travel cot was in our room as requested. She gave us two room keys and explained how the lifts worked and sent us on our way to get a much needed lie down after a long day of touring Birmingham.

I was really pleased with the size of the room which was comfortable enough for all three of us to wander around in without banging in to things. The bed was huge- definitely a superking size and even with the three of us in it, I could stretch out and still not touch my husband! The room also came equipped with two phones, a TV with freeview and a few Sky channels such as Sky Atlantic, a fridge and minibar, tea and coffee, a hairdryer, an ensuite bathroom with a bath, toilet and sink and USB charging points next to the bed which made me very happy because I hate it when hotels don’t have charging points next to the bed.

The bed was really, really comfortable and the mattress was firm. We were given four pillows which was lovely and the travel cot came with a mattress. There was plenty of storage space for clothes and a huge mirror next to the TV, perfect for me to do my make up in front of.

We went out to eat early (oh, the joys of having a toddler with us!) and were back in the room by 7pm. We had been up since 5am and had been traipsing around Birmingham all day so we decided we would go to sleep at the same time as Dexter. We also decided he would sleep in bed with us as he hasn’t slept in a travel cot for a couple of months now, and the bed was big enough for the three of us. As I previously said, the bed was comfortable and Dex and I snuggled nicely, but unfortunately a good night’s sleep did not come. We were first woken at around 9pm by the bass of the music coming from next door. My husband rang reception to see if they could ask the occupants to turn it down. We then heard somebody come up, knock on their door, have a conversation with them and then leave again. Five minutes later our phone rang for them to update us on the situation. The music started up pretty much immediately, and we all tried to get back to sleep.

By 11pm, my husband had had enough and rang down again. To be fair, the reception team were fantastic and came up once more to deal with the situation, not long after the music ceased, yet once again we received a phone call around ten minutes later updating us- a nice touch, but unnecessary as it was just keeping us awake. All was peaceful until 3am, when a couple decided to have an argument right outside our room, calling each other all the names under the sun, before continuing it inside their room. I could hear every word spoken- sound proofing is definitely something that is required in this hotel, and if you are planning to stay on a Friday or Saturday night, either you need to get really drunk so you sleep through it all, or you need to bring some earplugs with you.

After a really rubbish night’s sleep, I barely wanted to get out of bed, but get out of bed we had to because we had booked Cadbury’s World for 9.30am. Imagine my horror when I realised breakfast didn’t open until 8am on a Sunday. (Definitely worth baring in mind if you are taking children who like to get up at 6am or earlier!)

We traipsed down to breakfast for 8.05am and there was only one other couple there, who had already sat down. There was nobody waiting at the desk to greet us and despite making eye contact with a member of staff, she took her time to come over. When she eventually did, she didn’t greet us with a friendly Good Morning, instead said, please give me a minute, and started making notes on a piece of paper. No smile, no greeting, no warmth. I was not impressed.

Eventually she sat us down in a booth and explained there was a continental buffet, but hot food had to be ordered. She took our order for hot drinks and toast and said she would be back. Still no smile. I was worried we were going to be late for Cadbury’s World, annoyed that I hadn’t slept well and really annoyed that we were being treated so rudely.

We ordered our hot food- I had a full English, Dexter had waffles and my husband had bacon baps and they arrived promptly which was needed. The full cooked breakfast came with two poached eggs, one sausage, black pudding, a grilled tomato, two rashers of bacon and three tiny hash browns. It wasn’t the best breakfast I’ve ever had, but I was in a bad mood. Dexter’s waffles came topped with thick yoghurt and berries and looked absolutely amazing. Neil really enjoyed his bacon baps.

From the continental buffet we got a selection of croissants and pain au chocolats, orange juice, fresh fruit and yoghurt. These things were really, really yummy and I wish we’d had more time to sit and enjoy the instead of having to stuff our faces and get out of there. Next time I’ll remember to check what time breakfast opens and book our attractions for later in the day.

I really loved the location, how stylish the hotel was, our check in experience, the room and the huge, comfortable bed. Unfortunately a few things let the stay down, although a few are out of Malmaison’s control. I know it’s not their fault that hotel guests were noisy, but perhaps something can be done to try and sound proof the rooms, or perhaps leave a card in the room on weekend nights reminding occupants to be quiet when they return from their nights out. I was appalled by the standard of service at breakfast and this has put me off ever returning to this particular Malmaison again. I expect to be greeted warmly upon arrival at breakfast with a Good Morning, a smile, or perhaps even being asked how our sleep was. I do not expect to be tersely told to wait, despite their being only one other occupant in the restaurant.

Have you stayed at the Malmaison Hotel Birmingham? What did you think?