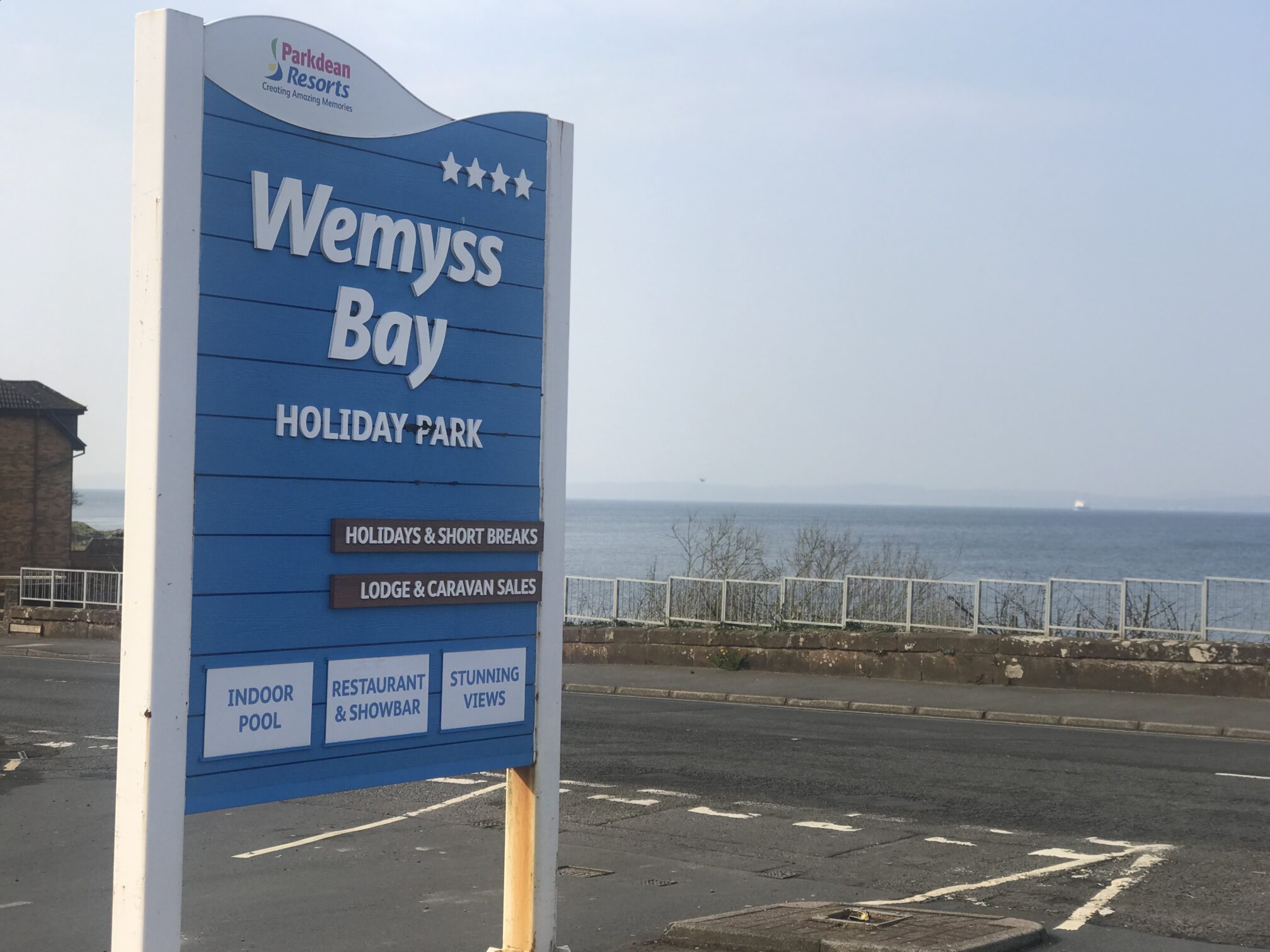 We have just returned from a four night stay in Wemyss Bay Holiday Park located in Renfrewshire in Scotland. I booked this Parkdean Resorts holiday via Hoseasons for the absolute bargain price of £169 for the four of us, despite it being the Easter holidays. When I was looking for reviews online to try to understand why it was so cheap, I couldn’t find much, so here I am reviewing our short break in glorious Scotland, in one of the most beautiful parts of the country.

Wemyss Bay Holiday Park is located in the small town of Wemyss Bay on the coast of the Firth of Clyde. The park itself is located up a steep hill so the views over the bay are absolutely stunning. On clear days you can look across to the Isle of Bute and watch the ferry make its way across the firth.

There isn’t an awful lot going on in Wemyss Bay but there’s enough to get by. There’s a train station, a chippy, a cafe, a petrol station and a Spar shop.

Inside Wemyss Bay Holiday Park is a plethora of caravans, The Venue, which has all of your entertainment needs, a playground and a Nisa shop.

Having only paid £169 for four nights, I wasn’t expecting much from the caravan, but it was slightly better than I expected. When we arrived it was bitter cold as I assume the caravan had not been used in a while, but luckily there were electric heaters in each bedroom and a gas fire in the lounge.

We stayed in a three bed ‘Carlyle’ caravan which had a double bedroom and two twins. The open lounge and kitchen area had a gas cooker/grill, four gas hobs, a microwave, fridge/freezer and a large seating area with freebies TV. There was ample wardrobe storage in each bedroom and plates and cooking utensils available in the kitchen.

We could just about squeeze the Chicco Next to Me in the double bedroom where we slept and I pushed the two twin beds in one of the bedrooms together to make a huge bed for Dex. I didn’t need to worry about him falling out of bed because the room was that small, but that was great for us! He had fallen out of bed in Bluestone at 3am and I really didn’t want a repeat of that!

As I said, the first night was really cold, but because we weren’t using the third bedroom, we could pinch extra duvets to help us keep warm and I’d made sure I’d packed warm bedclothes for Felix. As the week wore on, the caravan warmed up considerably and one evening we even had to have the windows open because the heat was unbearable. That’s caravans for you!

The gas cooker was absolutely ancient and it was difficult to light and nothing seemed to cook properly in there- it either got too hot or not hot enough! The microwave was tiny so we couldn’t use our steriliser, but on the whole the caravan was fine considering what we paid. The place always seemed to be a mess because we were so cramped in there and I was surprised there was no vacuum cleaner available meaning we left the carpet in a bit of a mess.

There’s plenty to do on site and in reality you don’t need to leave the caravan park at all. Included in the price of our holiday were entertainment passes for the whole family which give you access to what’s going on in The Venue each day and night.

There is a heated indoor swimming pool which you are given a timetable for on arrival. There’s lots of different slots including owners swim, open swim, pool party and sessions for kids. Each session lasts an hour or so and then the pool is cleaned ready for the next session. The water is nice and warm and there’s a smaller section for young children.

Outside is a playground which Dexter absolutely adored. There’s two slides, swings, a roundabout, climbing equipment and a zip wire. There’s plenty of benches where you can sit with a drink and watch the kids go mad which is nice and the area is completely closed off from the road so there’s no worry of kids getting hurt.

Inside The Venue is a bar area and stage where the evening entertainment takes place, a restaurant and an arcade zone. Each evening there’s plenty of entertainment going on including bingo, kids disco and live shows. To access The Venue you must show your entertainment pass when you arrive, so always make sure you have them to hand.

Wemyss Bay Holiday Park’s on site restaurant is located inside The Venue and offers tradition pub grub and drinks in a relaxed environment. We dined here one night only as we chose to self cater for the rest of it. Sometimes eating out with Dex can be stressful so we saved it for the last night.

Neil had a burger and I had an open chicken kebab. Both were yummy. Dex had a burger, chips (no jacket potato available!) and ice cream for pudding.

I was happy with the food, but the service needed much improvement. Plates were taken away while I was still eating and when I stopped eating for a moment to settle the baby, I nearly lost my plate again to an over zealous waitress. Nothing irks me more than being asked five times during a meal if I’ve finished yet.

Days Out from Wemyss Bay

There’s so much to do in the local area which is one of the reasons why I had picked this destination in the first place.

You can get the train from Wemyss Bay to Glasgow and it only takes around 50 minutes. The views from the train across the bay are stunning and before you know it you’re in the middle of the busy city of Glasgow. There’s loads to do for kids. We spent the day in Riverside Museum checking out all the vehicles they have on display in the Transport Museum and also enjoyed a long walk along the river, chatting to friendly Glaswegian folk. The train was only about £8 each (with the kids obviously being free) and the museum was free so it was a really cheap day out!

I believe this is the nearest sandy beach, not only to Wemyss Bay Holiday Park, but also to Glasgow. It’s a beautiful secluded little spot with free parking, easy access to the sandy beach and a little park, perfect for toddlers. The day we visited was a little drizzly, but this didn’t impact our time here which was lovely. Dex and I walked right up to the incoming tide and looked for shells and interesting rocks on the sand. We then (carefully) climbed the rocks and examined the rock pools before having a good play in the park. It’s definitely worth a trip out to Lunderston Bay from the caravan park.

From Wemyss Bay you can take a ferry to Rothesay on the Isle of Bute and the best bit? You can take your car too! Unfortunately we didn’t get round to doing this, but I believe it’s well worth the trip and very reasonably priced too.

Overall we had a great time at this Parkdean Holiday Park and are considering booking again for the summer (although we’d change the location and try Devon or Cornwall next time.) After an amazing week in Bluestone, it was going to be hard for Wemyss Bay caravan park to live upto that, but we had a lovely time and all for a tiny fraction of the price. 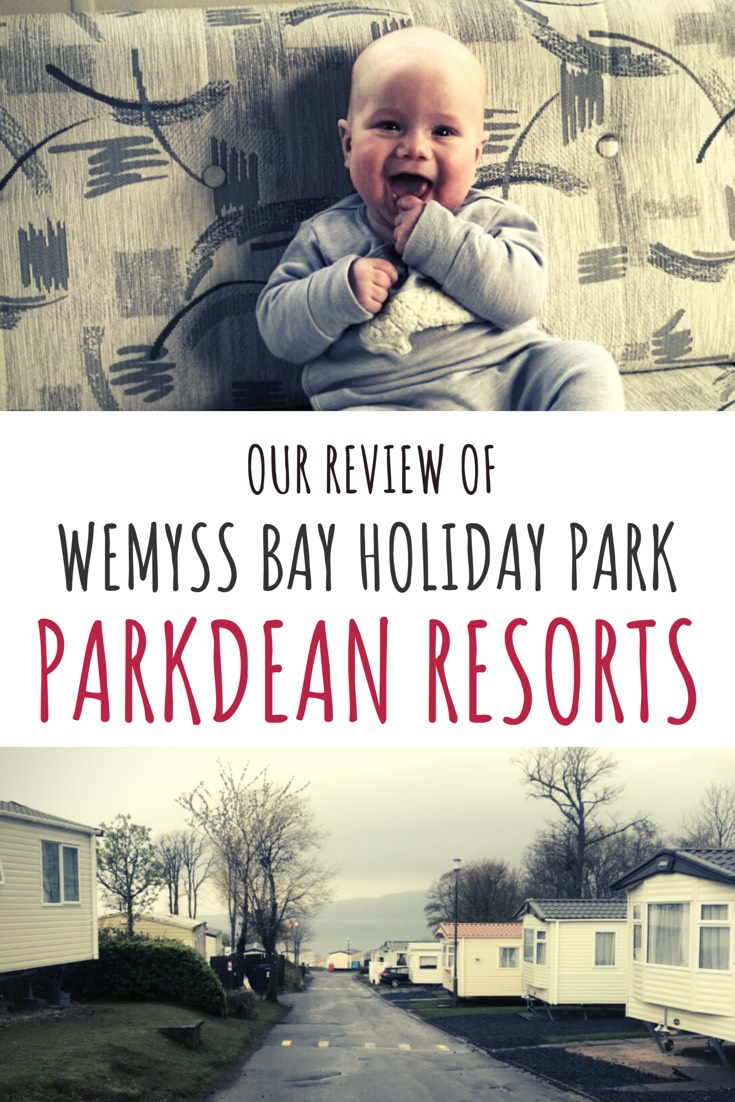